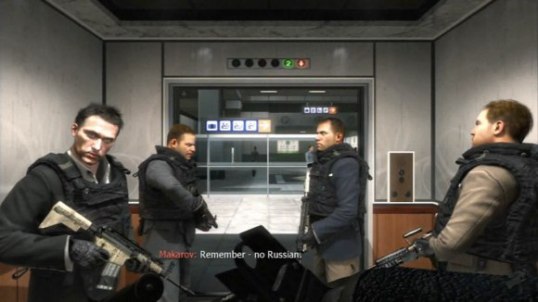 Why is it whenever something like this happens, the media jumps to blame anything and everything. There was a terrorist attack, Call of Duty did it. A car got stolen, Grand Theft Auto did it.

I love how there was no mention at all in the above news report that there is an option to skip the “No Russian” mission. It is very disturbing, there is no denying it. I played the mission and had difficulty pulling the trigger even on video game civilians. But I felt it was an important mission in the game. To give players a perspective on why the War on Terror exists.

To compare the Moscow airport bombing to Modern Warfare 2 is ignorant. While the incident was tragic the only link it has to MW2 is that is happened in a Russian airport. There were no men walking though the airport gunning down people with LMGs.

As for the theory that terrorists are using games like Call of Duty for ideas to apply to real life, that is a load of BS. Are they aware of how silly that sounds? I’m sure the terrorists have plenty of sick ideas without the “help” of American video games.

The bottom line here is that people need to stop blaming video games for the problems in the world today. That goes for TV and books too. Just because they are easy targets to place blame doesn’t mean they are the problem.

While it does look epic I do have some concerns, but first check it out for yourself.

Now before I start I just want to say that I am aware that you cannot judge a game by it’s teaser trailer. I also want to make sure everyone knows that I am not a MW2 hater. I just have a love/hate relationship with it and would take WaW over it any day of the week. I like it but think it was overhyped and didn’t deliver. But I still enjoy playing it occasionally with a few good friends.

Now on to business. My first concern is that it has a MW2 look to it. Which could be good a good and a bad thing. The reason this concerns me is because of the bad experiences I have had with MW2. That is most likely why I have a biased view against MW2 in general.

On a similar thought, if Black Ops plans to release a beta it could avoid most of the major issues that have caused my love/hate relationship towards MW2. Notice how i say most, not all. There are always bound to be glitches and idiots who exploit them. But a beta can help tremendously in that area. As I have stated in past rantings, big releases such as any Halo or COD title should have a beta. There are just so many people playing that the potential for issues will be found and exploited right away.

Next thing that bothered me was the killstreaks. I was really crossing my fingers for fixed 3, 5, and 7 killstreaks. Wishful thinking methinks. But that doesn’t totally ruin things as long as a barebones playlist is an option. That will keep me happy.

This of course is only the first MP trailer, and while it didn’t “wow” me they way I wanted, it still got me excited for November. I still have faith that Treyarch will deliver with this game.

I really want to hear other’s opinions on this one. First thoughts?

As far as I’m concerned, thats what you get for banging someone’s door.

EDIT: Word on the street is that it’s a fake, still pretty funny though.

Somehow I never get tired of playing this game. While I do still enjoy MW2 every now and again, I can only stand it for so long. I get frustrated with the people playing and the 439048290 messages offering 10th prestige lobbies. Not that WaW doesn’t have both I just find that there is less of it.

From Search and Destroy to (REAL) Capture the Flag to Zombies, that’s how my gaming time was spent this weekend. It makes me smile that there are still thousands of people playing this game even after the release of MW2. With Black Ops coming out the end of this year I predict more people dusting off their WaW and remembering what an awesome job Treyarch did with Their COD title.

So how did the rest of you peeps spend your game time this weekend?