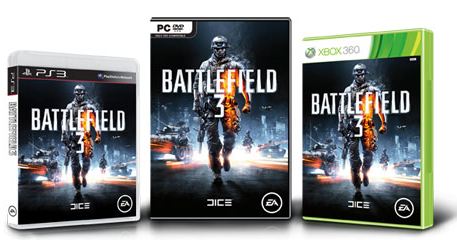 Battlefield 3 will be set to take on Call of Duty this Fall. A teaser trailer was released on the Battlefield website early this morning. No actual gameplay footage but definitely some intense action. Check it out and let me know what your thoughts are.

The publisher confirmed to the media it will host an unveil event for the game on Mar. 1, 2011, taking place during the week of the Game Developers Conference in San Francisco.

And for all you peeps who picked up the Limited Edition of Medal of Honor you’ll be able to get in on the beta. At the moment there are no details on when the beta will occur. Battlefield 3 is due to drop sometime in 2011. My guess would be Fall or holiday since it’s possible we’ll see the beta in early Spring. All my own guesses BTW, don’t quote me on that.

A little help from your squad

I’ve said it many times before and I shall say it again, Battlefield Bad Company 2 encourages players to work as a team. Nothing is worse than getting into a game where everyone is running around like chickens with their heads blown off. Make some friends and make a squad.

One of the greatest advantages to creating and working with a squad is the spawning. If your on your own, you are restricted to spawning in the same way far off area over and over. In a squad, your teammates are like mobile spawn points. It allows you to jump right back into the thick of the battle beside your teammate.

The other most obvious advantage to a squad is coverage. If you’re going in to plant the explosive wouldn’t it be great to have a sniper on the hill picking off enemies while you work your magic? Use strategy with your squad mates. Don’t just carry the same class, barrel in and expect the enemy to let you plant the bomb. You will all die and the other team will have a good laugh at your expense.

So put your friendly hat on and go find some squad mates.

It has been one week since the release of EA’s Battlefield Bad Company 2. I have finished the single player campaign and gotten a few multiplayer games under my belt. In all honesty this game is great but not great enough to surpass the behemoth that is Modern Warfare 2.

The single player storyline was full of action and even had a few good laughs. The bond that connected the four characters sucked me into everything they said and did. If I can bond with a video game character and want to see where their story takes me, the game is worth every penny I spent on it.

As for the MP, I’m still getting the hang of it. I must tone down my fast paced “run and gun” tactics of Call of Duty. My favorite thing about the BFBC2 MP is that it is just straight up game play action. No glitchers, hackers, or boosters. Just team on team competing for a win. Never mind the all the killstreaks that just take the focus away from the actual objective.

It’s nice to have something different in my game collection but I see myself going back to MW2 soon. As much as I love the simple game play of BFBC2, I miss the speed of MW2. “Run and Gun” is what I do best. In Battlefield, I feel myself sitting back a little more. Maybe I just need more practice, or just a better squad. I’m not giving up on this MP just yet.