Another year, another Call of Duty. Infinity Ward is back in the saddle with Sledgehammer games to bring us Modern Warfare 3. But does it live up to all of the hype? That would depend on who you ask.

DISCLAIMER: The following is my personal opinion on MW3 multiplayer based on my experience so far. If you don’t like it, no one is forcing you to read it.

If you’ve read my blog in the past or at least follow me on twitter, you’ll know of my distaste for MW2. I was sorely disappointed in that game especially after how much I enjoyed (still enjoy) CoD4. But I left that bitterness at the door when I received MW3 this week. I was ready to give this game a fair shake like I do with all games.

What I got was another let down from Infinity Ward. Don’t get me wrong, I loved the single player campaign. Spec Ops and Survival mode are also awesome parts of this game. But the multiplayer just fell short for me again.

Call me a Treyarch fangirl if you want but there were a few things that Black Ops brought to the game of CoD that IW decided to cut from MW3. Let’s start with the ever popular subject of quickscoping. Remember this…

I agreed with it then and I agree with it now. But for some reason QSing is back with a vengeance and promises to annoy you with messages from 12 year olds who want to “1v1 QS” you. Ok fine I get it, the QS fan base is there. But what about the rest of us who want to play fair? I would honestly love to see a sniper-less lobby. Make everyone happy.

How many of you have been playing the new game mode Kill Confirmed? It’s actually my favorite game mode so far because it’s more than the same old TDM. If you kill an enemy you must confirm it by collecting their dog tag. But how cool would it be to be dolphin diving to grab those tags? Yes it’s a small feature that they took out but you don’t really know how much you used it till it’s not there. I’ve found myself on a few occasions going for a dive only to drop to prone and start crawling to death.

Combat Training. Where is it? Another feature I found to be highly useful in Black Ops was cut from MW3. Don’t feel ready to jump online and take on real opponents? Jump into Combat Training to work on your skills against bots. I surely would have loved to have seen this feature return. It would be extremely helpful in learning the maps and learning about the new features of the game.

In game chat quality has turned everyone into annoying robots. I know I’m not the only one who has noticed. Try jumping from party chat to game chat and hear the difference. It’s to the point that even if I’m playing solo I’ll either mute everyone or hang out in an XBL party by myself.

“Too much of a good thing” is a phrase I think of when talking about the new additions to MW3 MP. So much stuff that I literally had to take my time to learn what strike packages were, what the new perks do, wait I have to level up my gun now?

Strike packages are a cool idea, especially for me who can never really get past a UAV or a care package in past CoDs. Depending on the package I chose, the kills can carry over to get more of the rewards. But sometimes even the rewards are overwhelming. Spawing into a carpet bombing only to respawn into a helicopter attack can get frustrating. But killstreaks have always been frustrating to me since CoD strayed from the 3, 5, and 7 fixed rewards.

My point is that with every Call of Duty title since CoD4 there have been more and more additions. In my opinion with every new addition we start to lose sight of the basic gameplay that made CoD great in the first place. When you jump into a barebones playlist and are stripped of all the extra “stuff” you remember what the game was and how it should be played. 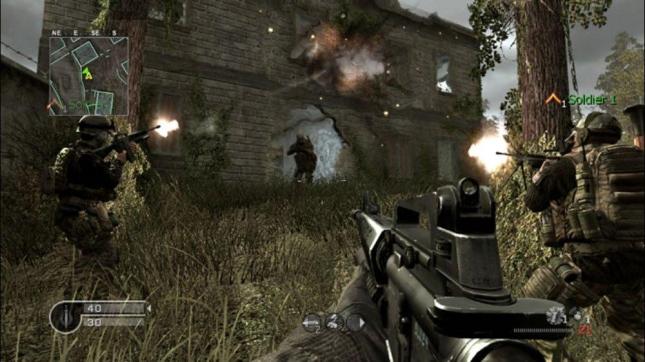 But this next generation of gamers just coming into CoD isn’t interested in how the game should be played. They want their “360 no-scopes” and other assorted trick shots so the can make “sweet montages”. The hell with everyone who wants to have fun and play fair. I’m not saying everyone playing MW3 is like that and I’m not saying CoD4 (and every CoD after it) didn’t have that. The world is full of idiots but Call of Duty seems to have an increasing number of them playing the MP.

When I first sat down to play MW3 MP I could feel the echos of CoD4. It’s in there somewhere hidden behind all the bullshit and morons. But it shouldn’t take so much effort to find it. When I sit down to game, I’m looking to have fun. If I get to a point when I’m no longer having fun, I move on.

MW3 isn’t yet a week old so I’m not ready to give up just yet. But I don’t see it having the replay value for me that Black Ops, World at War, and CoD4 had for me. I could of course be completely wrong. It wouldn’t be the first time.