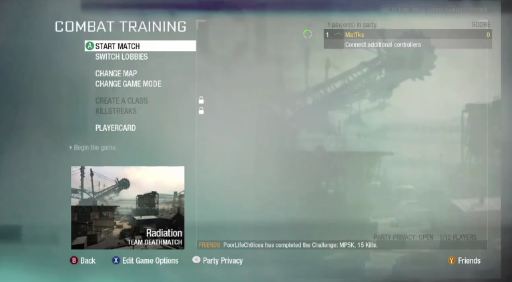 Another awesome concept that I think is long overdue. When this mode was demoed to us in LA, I really couldn’t tell that both teams were full of bots.

Combat training gives players the opportunity to practice up before heading on to the MP battlefield. Your enemies and teammates (if you are just playing by yourself) are bots. Players can choose the skill level of these bots in order to get the most out of their training. So whether you are new to COD or you are a pro just looking to get some practice this is the mode to choose.

Combat training has a separate ranking system, so don’t get the idea that you can just dumb down the bots to boost your rank. But if your a player who gets a little intimidation by the competition in regular MP, get in on combat training to hone your skills, learn the maps, and just have a good time.

My favorite part of this mode was why it was created. Dan Bunting and David (Vahn) Vonderhaar explained to us that there were players who play Call of Duty but never set their virtual feet into the MP. That was something that they wanted to change in Black Ops.They want to give wary players a chance to play the MP without getting harassed by “veteran” COD players.

It was great to hear them talk about their concern for the players and that they wanted their players to get the most of of their gaming experience with Black Ops.