Xbox LIVE Arcade’s second game in this Summer of Arcade series is Hydro Thunder Hurricane. An arcade style speed boat racing game designed as a sequel to Hydro Thunder which you might remember from your original PS/N64/dreamcast days. 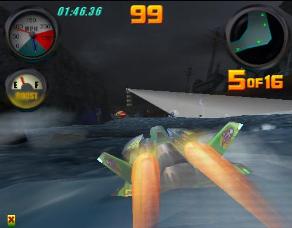 Now I’m not a huge fan of driving/racing games but I was really drawn to the graphics and the colors in this game. Like most racing games you race on tracks to earn credits to unlock new tracks and boats. There’s also a multiplayer mode. You can choose to race your friends in split screen or race over Xbox LIVE.

After being blown away by LIVE’s first game this summer, LIMBO, Hydro Thunder Hurricane left me a little disappointed. It’s a nothing special speed boat racing game. So if you are not into racing games I wouldn’t bother. If you played the original and want a game that is pretty much the same besides the upgraded graphics, go for it. 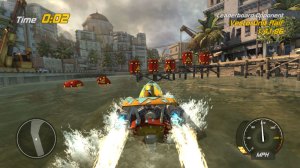 I am still trying to figure out how to describe this game. It’s a game that will make you feel the full range of you’re emotions. LIMBO is a puzzle game that puts you in the shoes of a little boy who wakes up in a dark forest. You are given no explanation, goal or direction.

The lack of explanation didn’t bother me, I immediately felt like I knew what I needed to do. I needed to find my way out of the forest. Easier said than done of course. Being a puzzle game, making your way through the world required you to push boxes/chains, avoid buzz-saws/giant spiders, and many other obstacles.

No need to adjust your TV, this game is in black and white. But the lack of color adds to the mystery that is the core story of this game. The same can be said for the lack of dialogue.

While it’s a game that some can complete in one sitting, others (like me) found themselves getting frustrated with some of the puzzles. This was the queue to put it down for a while. Come back with a clear mind and you’ll wonder what the hold up was.

LIMBO is the first game of Xbox LIVE’s Summer of Arcade. It certainly did not disappoint. If you want a game to challenge your mind and raise your eyebrows shell out the MP for this game. It’s well worth it.

There you have it folks the first Special Edition console using the new 360. Very fitting that it should be a Halo title. And holy crap it looks freakin awesome!

As for the specs… via kotaku.com

The bundle will be available on Sept. 14, when Halo: Reach also launches. It will cost $399. It includes the standard Xbox 360 S configuration inside the Limited Edition, UNSC-stamped silver housing, the two silver controllers, and the game.

To add to awesomeness there are also Halo-ish sounds accompanying the console according to Xbox LIVE’s Major Nelson.

So if you love Halo and want the full on Halo Reach experience, you might want to start saving up those pretty pennies.

In an Xbox press release today…

The fate of Carmine lies in your hands! For the first time in franchise history, Epic Games and Microsoft are giving fans the chance to decide the fate of a character in “Gears of War 3.” By purchasing avatar gear on Xbox LIVE Marketplace, fans and gaming communities around the globe will decide the destiny of the newest Carmine brother set to appear in “Gears of War 3,” with all the proceeds going to the Child’s Play Charity.

What an awesome way to get the gaming community involved with a game. Not only that, it supports a great cause! Personally I plan to purchase the “Save Carmine” shirt. Don’t you think that family has been through enough?